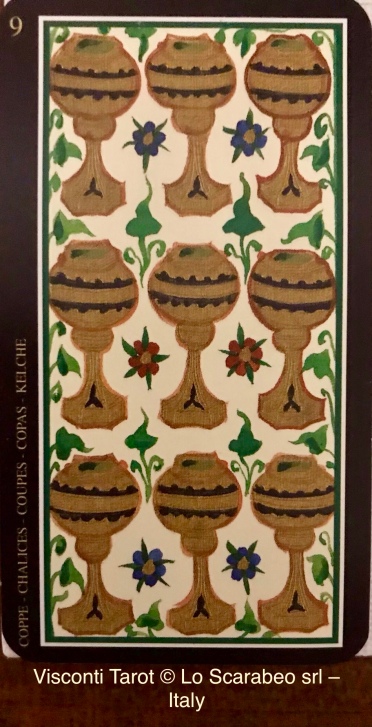 A Table Set for Nine

Frida sat on the high-backed chair and waited. The grandfather clock ticked as the minutes passed. The sky rumbled, portending storms. She gazed upward with a wary eye and hoped the thunder and lightning would hold off until they arrived.

She set the dining room table for nine people. Her children and spouses were finally coming to dinner. Frida hadn’t seen them since their father died. A lightning bolt flashed through the window and Frida sighed. The house smelled of roast and cookies and now the storm threatened to ruin her much expected evening.

Frida glanced at her watch. They were late.

She surveyed the room; all was in order. Her eyes rested on the little figurines on the mantelpiece. They were stone figures and metal amulets of the Old Norse gods she loved so much. On the walls hung pictures, paintings she’d done herself of the same old gods as she imagined them and over the doors she’d placed carvings of runes.

An old familiar pain stabbed her heart as she remembered Wayne, her husband, telling her to throw that shit out. She had put them all in a box for thirty years and unearthed them after he died, once the walls had stopped echoing his voice and the floors had ceased creaking with his footsteps. Frida grabbed her old tattered copy of Norse Mythology and pressed it to her chest as she’d done for years whenever Wayne’s remarks stung her soul. She shut her eyes and held it tight and told herself when she opened them, she would see the clean, dusted and vacuumed room she’d slaved over for the past week, and not the shabby pigsty Wayne always said she kept.

The past days had revolved around this dinner. She’d planned the menu, shopped at three different markets for the perfect ingredients, and spent days cleaning the house down to the last nook and cranny.

Fat drops pounded on the roof and window. The grandfather clock ticked merciless as the evening dragged on with no sign of her children. Each ticktock sang “not-coming” and “hate-you”, and “stu-pid”, and “use-less” until the ticking got so loud it morphed into Wayne’s raspy voice and her children’s echoed the words. Frida clutched her book tight and laid her head back against the chair. She fought back tears, and a lump formed in her throat.

The hail pattered down as the tears burst through her eyelids. It thumped and banged and the whole house sounded like a hard-rock concert (another pleasure Wayne had stripped from her).

A tap on the door startled Frida out of her misery. She stood up in a flash, and still clenching her book, glided to the door. Could it be? Did they come after all? Did they brave the storm to see her?

Frida opened the door with a smile which vanished when she saw two tall men on the stoop. One dressed in a dark cloak, half of his face hidden by a lock of hair that covered his eye. The other was muscular with hair so red and wild his head seemed aflame.

“May I help you?” She bleated and cursed herself for not peeking through the peephole.

“Madam, could you spare food and shelter for weary travelers? My sons and I have walked a long way, and we saw your light…”

The cloaked man’s voice was soothing and familiar, as if she’d heard it a long time ago.

“Hello!” The mellifluous voice came from behind the cloaked man and a smiling blond face appeared. He lit up the night and Frida’s fear and apprehension washed away from her as the young man’s smile warmed her heart.

“Please come in,” she said and stepped aside.

The tall men filled the hallway. She offered to take the cloak, but the man refused.

“You are expecting company?” The red-head asked, pointing to the dining room.

“My children. They are late.”

“Bad storm out there,” the blond man said and his voice tickled like a baby’s soft laugh.

She led the men into the kitchen and offered to pack them a meal to go, but as she glimpsed the lovely table, an idea popped in her mind.

“I don’t think my children are coming. They were close with their father, not so much with me.”

The three men smiled and followed her into the dining room. The storm raged outside but inside the house burst with merriment. Ms. Williams, the neighbor, glanced once or twice in their direction, puzzled by the laughter that broke through the rumble of the storm. She knew Frida was unhappy and marveled that her children had shown up at all.

“They think I’m an idiot, you know,” Frida blurted out.

“My children. Their father taught them I am weak and stupid. It embarrasses them to be with me in public. My presence shames them,” tears sprang to her eyes as her voice broke, “perhaps they are right.”

“They are not,” the cloaked man spoke in a voice so deep even the thunder quieted, “you have forgotten who you are, but you are not weak.”

The men held her gaze, and the room went silent.

“We have been watching you forever. You are better than you think. We are here to take you home.”

“You know who we are,” the cloaked man fixed his piercing blue eye on her.

Frida glanced from one man to another and the fog of insecurity and oppression Wayne had woven around her dissipated. She looked at her paintings, and her figurines and at the book she’d set on the table, and all fell into place, as if she’d found the missing piece of a puzzle. The cloaked man whose hair hid his eye socket because he had no eye. He’d exchanged it for wisdom. The muscular red-head who filled the room and whose footfalls rattled the house and appeared on a thunderous evening, his arms folded above a glistening belt. Finally, the man whose radiance lit the darkest night and whose kind smile melted the stoniest, loneliest of hearts.

“You can’t be…” she stuttered.

“Say our names, and we’ll bring you home.”

“You know where, all you must do is say the words.”

Frida gulped. She’d dreamed this for years. As a child, she’d wished they were real. As a teenager, she’d asked for their help. And, as a married woman, she’d shoved them to the back of her mind yet always hoped they’d take her away.

She pointed to the cloaked man, “Odin.”

Her gazed fixed on the red-head, “Thor.”

She beamed at the blond, “Balder.”

Ms. Williams followed the policemen into Frida’s house. She’d alerted them because she’d not seen her neighbor since the night of the hailstorm. The house was empty, the grandfather clock the only sound.

Ms. Williams stood in the dining room; she pressed her hands to her chest and whispered, “Wherever you are, Frida, I wish you the happiness you never had.”

A thin veil of dust had settled on the dining room table. It was set for nine.